LCA EXPOSES SYSTEMIC NEGLECT AND ABUSE AT SUPPLIER TO

A three-month undercover investigation by LCA exposed severe abuse and neglect at Crimson Lane Farms, a pig breeding farm that supplies Olymel, Canada’s largest pork processor. The farm, located in Kenilworth, Ontario, houses approximately 1,600 mother pigs producing 500 piglets per week that are raised by Nature Pork and then slaughtered by Olymel and sold by major retailers across Canada including Walmart, Metro and Real Canadian Superstore.

LCA’s hidden-camera video shows workers striking, shocking and kicking pregnant pigs, leaving sick and injured piglets in piles of dead piglets, and allowing pigs with extreme prolapses — in which their reproductive organs and/or rectum are expelled from their bodies — to suffer for prolonged periods.

Inadequate medical treatment and failure to promptly euthanize the gravely ill caused some pigs to slowly deteriorate to death. One sow with a swollen leg and abscessed foot was left untreated in her crate while the condition worsened. She rapidly lost weight, and after four weeks of agony was finally found dead.

Sick and injured piglets suffered immensely during their short lives. Workers would repeatedly throw piglets against the barn floor as an ineffective euthanasia attempt called “thumping.” Many times, workers failed to check if the piglets were actually dead after slamming them to the ground, so live piglets were tossed into piles of the dead.

Both Olymel and the Retail Council of Canada (The“RCC” – which Walmart, Metro and Real Canadian Superstore all belong to) say they require the humane treatment of animals raised by their suppliers. However, using Crimson Lane Farms in their supply chain is in direct contradiction of these claims.

Olymel’s official policy states, “As a major producer and processor of pork…Olymel requires that its employees and suppliers treat the animals with the greatest respect. From breeding and shipping to slaughtering, our company meets the highest standards of animal welfare and has adopted a consistent policy in this area.”

The RCC alleges to believe that, “…sows should be housed in an environment where their pregnancy, health and well-being are taken into highest consideration.“

After completing the investigation, LCA submitted complaints to the Ontario Society for the Prevention of Cruelty to Animals (OSPCA) and the Royal Canadian Mounted Police detailing over 70 violations of the OSPCA Act and the Criminal Code.  An additional complaint was filed with the Ontario Ministry of Agriculture, Food and Rural Affairs for violations of the Disposal of Deadstock regulation regarding the handling of fallen animals. 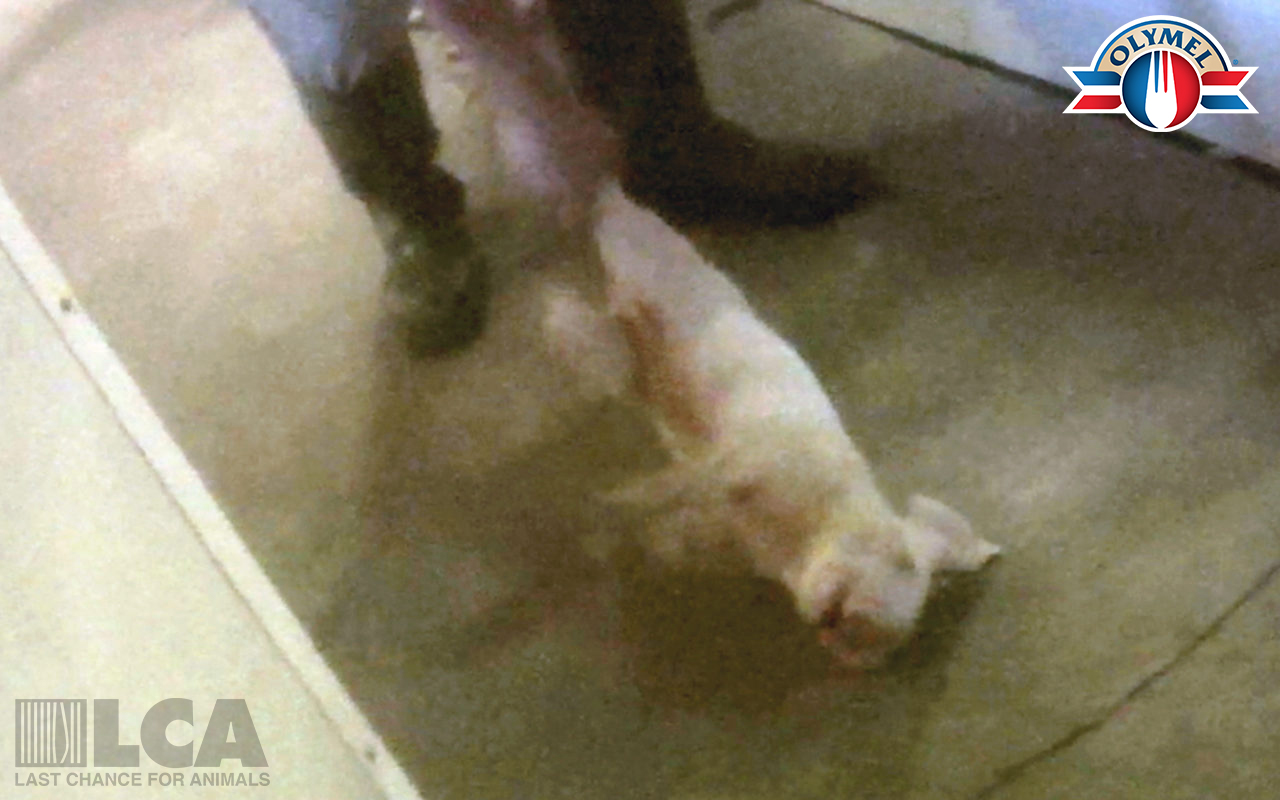 “The video shows that this farm euthanizes piglets by throwing them onto the cement floor. We have laws and regulations in Canada that are supposed to ensure that when an animal is being killed, it must be done humanely.  This means quickly and with no pain or suffering. Many of the piglets shown are still conscious after being thumped to the ground repeatedly.  The pain and suffering of these young piglets would be extreme.” 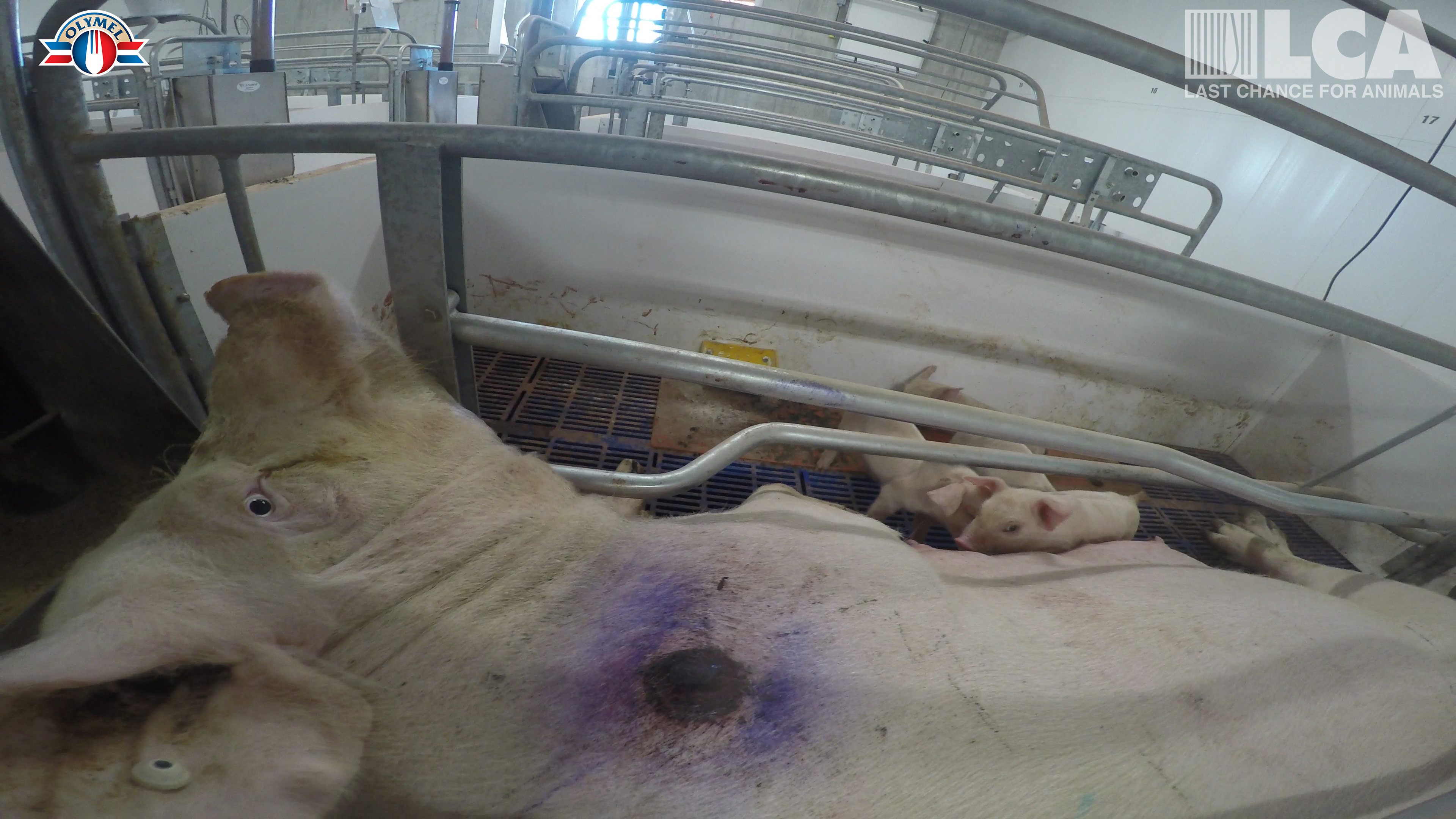 “Based on my review of the video evidence, this operation is clearly characterized by poor standards of ‘animal welfare,’ even in the limited sense used by the industry, unsanitary conditions, improper medical treatment, improper euthanasia and neglect and abuse on the part of workers.” 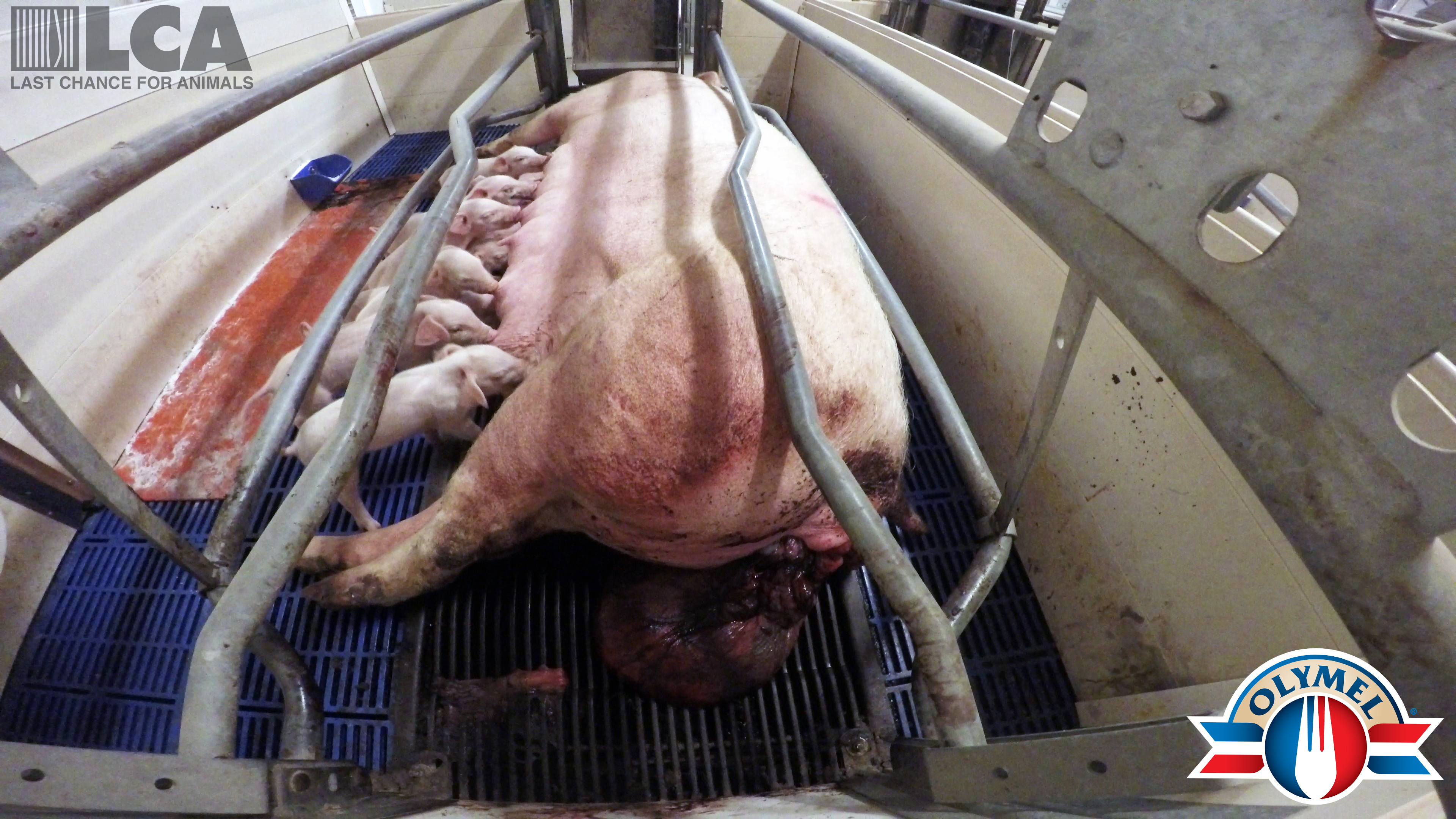 “Allowing the mother sows to continue to suckle with hideously prolapsed uteruses is one of the most horrendous abuses depicted in this video. In one case, the animal is tracked over time until the prolapse is a bloody, apparently infected, suppurating wound… I can authoritatively assert that the sows depicted with the prolapses were undoubtedly experiencing significant pain.” 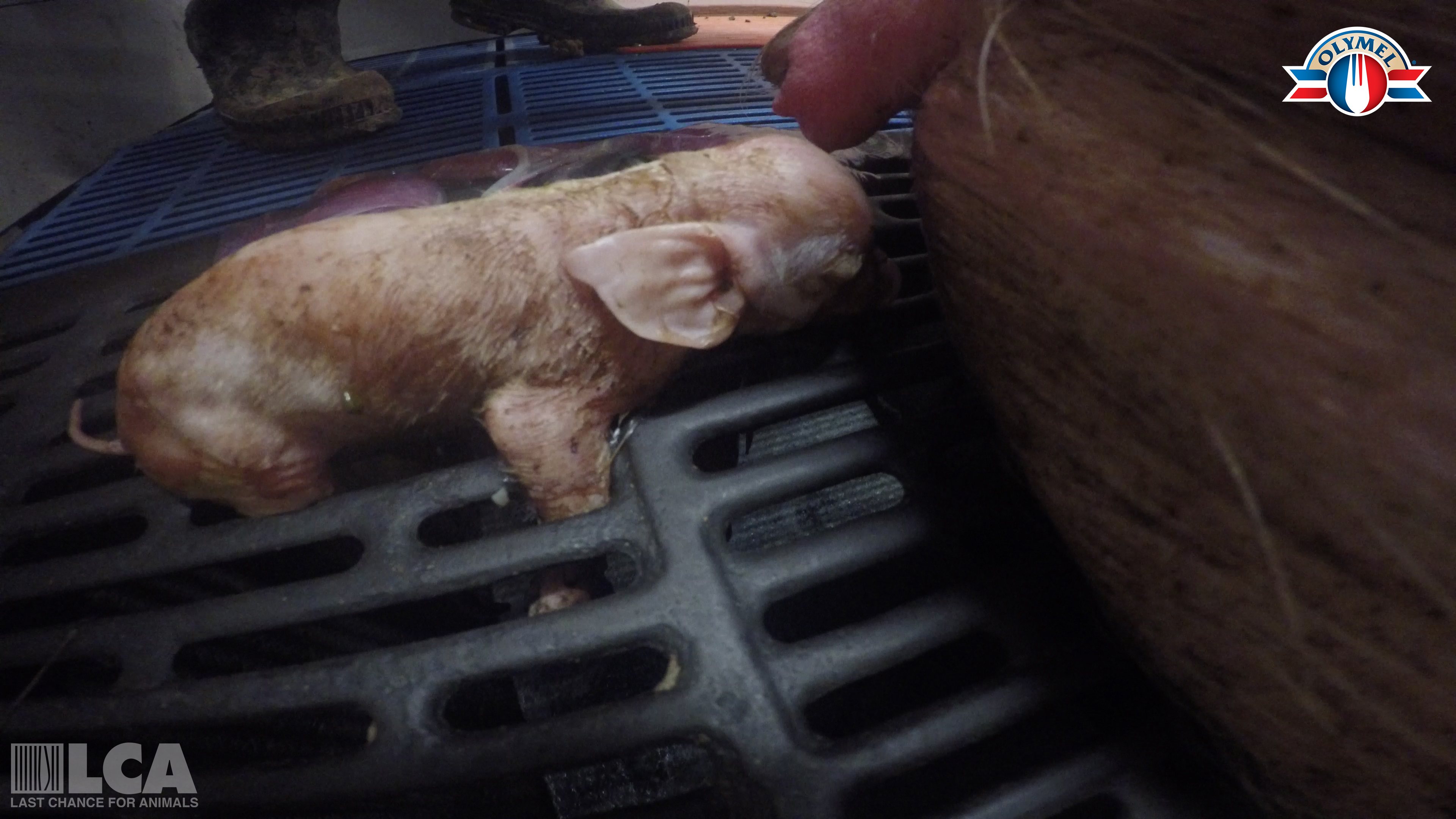 “It is clear from this extensive footage, that there are serious animal welfare concerns at this sow operation. Clearly, humane treatment and compassion are not taught to the staff at this facility, and as such, I can only hope that when the authorities witness these tapes, they will take the proper steps necessary to ensure that this farm is no longer allowed to keep animals in their care.”

Like other factory farms, Crimson Lane Farms houses pregnant sows in gestation crates, which are typically just 2 ft. by 6.5 ft. —  too small for the animals to turn around in. When nursing, they’re kept in farrowing crates, which are about the same size.

The crates are so small, sows cannot stand up or lie down without rubbing against the metal bars that run alongside their bodies. Because they can’t turn around to see their newborns, many piglets are crushed in farrowing crates as their mothers try to lie down and nurse them.

The sows’ restricted movement, combined with extended periods of lying on hard floors and constant contact against the metal bars, leads to gaping pressure sores. At Crimson Lane Farms these wounds were left untreated despite staff’s awareness of them, and were allowed to progress into serious injuries, resulting in prolonged and unnecessary suffering.

Farrowing crate confinement is not only cruel to sows, but is also dangerous for newborn piglets, whose frail limbs easily become stuck in the grated flooring. At Crimson Lane Farms, approximately 15-20 piglets die every week as a result of becoming stuck in farrowing crates, which causes severe injuries and prevents them from accessing food, water, and heat.

Olymel plans to shift to gestation-crate-free housing for pregnant pigs by 2022, and Canada began requiring that facilities built or renovated after July 1, 2014 use group housing systems for pregnant sows as opposed to gestation crates. Despite their nearly identical measurements, however, only the gestation crates will be phased out — and not farrowing crates.

The number of mother pigs confined to Crimson Lane Farms.

Crimson Lane Farms kills sick piglets by slamming them against the ground. 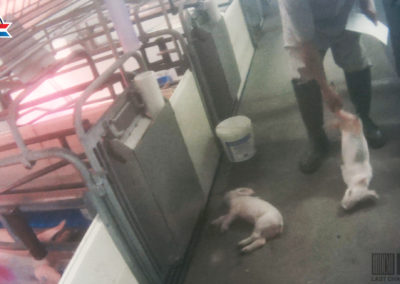 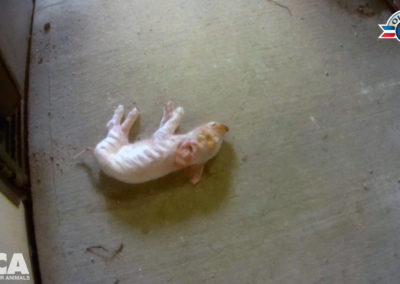 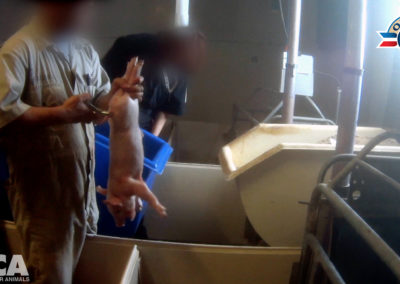 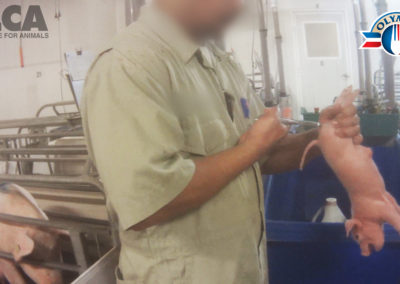 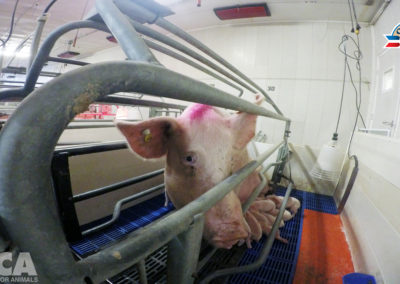 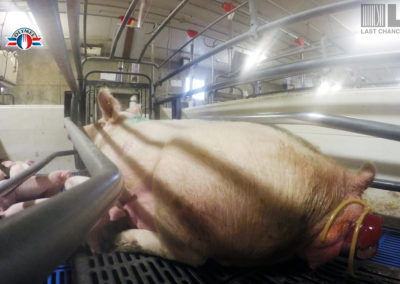 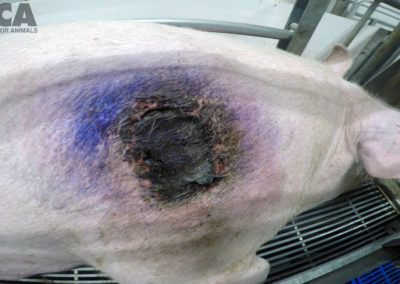 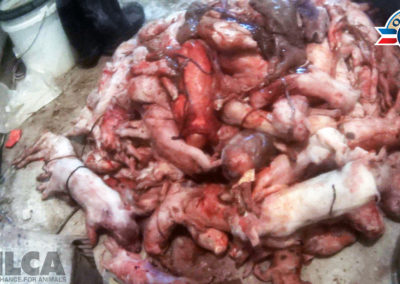 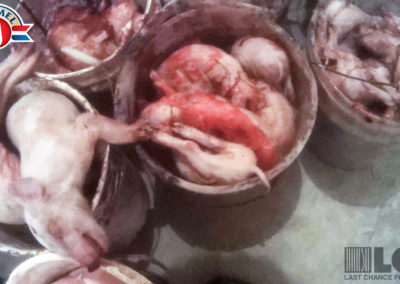 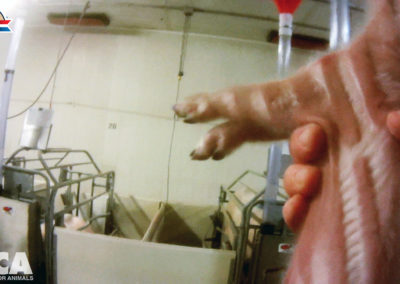 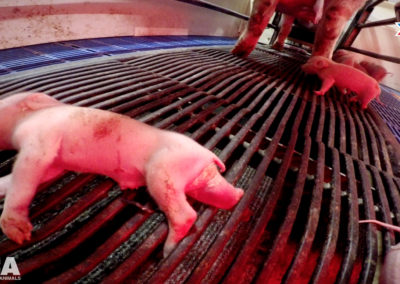 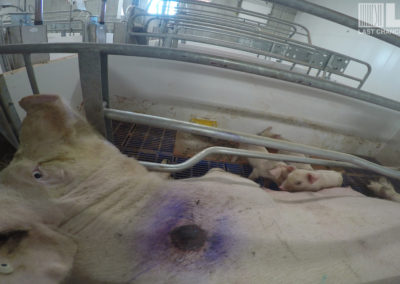 About Last Chance for Animals

Last Chance for Animals (LCA) is a non-profit organization dedicated to eliminating animal exploitation through education, investigations, legislation, and public awareness campaigns. Since its formation in 1984, LCA has succeeded as one of the nation’s pioneer animal advocacy groups. LCA’s educational and public outreach programs have empowered the public to make positive changes for animals in their communities. For more information, please visit: http://www.lcanimal.org